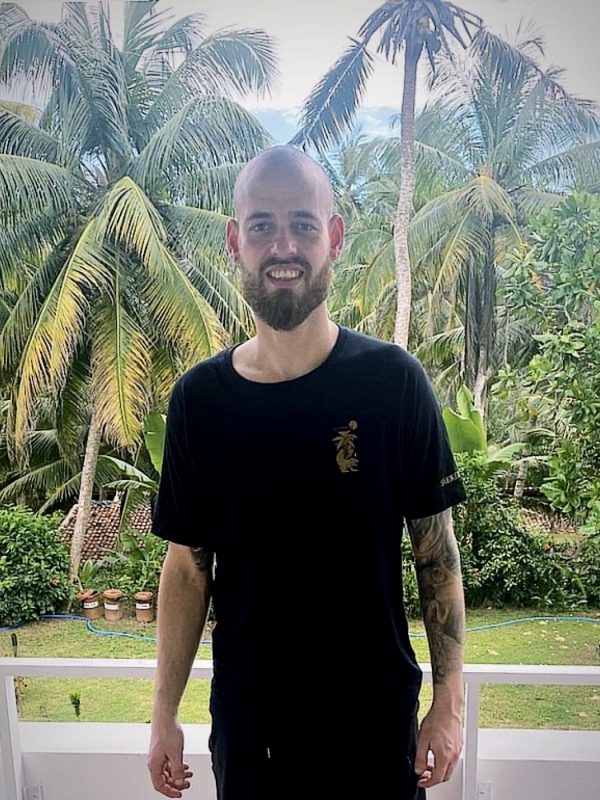 David comes from the live music / nightclub industry in London, where he spent 10 years. In December 2019, he invested in a bar / restaurant in Sri Lanka called Smoke & Bitters which has just been voted #42 in Asia’s 50 Best Bars. He came back to Europe in March 2020 and got stuck in the UK because of lockdown. In February 2021 he had the idea of opening a pop up in Brighton – The Lankan.

The main attraction of The Lankan is the Kottu. It’s a traditional Sri Lankan dish made in a different way, with some unusual variations available as well. It’s juicier and contains more veg than the traditional version. We’re also trying to create a bridge between Eastern dishes and the Western palate with our Kottu loaded fries as a more familiar way for people to try Kottu for the first time.

Where were born / where did you grow up?

I was born in Hungary, in a town called Gyor. It’s about the same size as Brighton (excluding Hove).

I liked Hungarian dishes made by grandma. It’s been a long time since that kind of food has been part of my everyday cooking, however my fiancée has been making some of them at home very often lately.

How did you end up in Brighton?

In 2020, after the first lockdown, I got a commission for three oil paintings but the flat I was renting at the time was quite small. Painting with oil, white spirit and similar chemicals with minimal ventilation is not something I would advise doing! I messaged my friend, Adam in Brighton to see if I could come over for the weekend to finish those paintings in his roof garden. He said yes, I came down to Brighton and never left.

Tell us about the journey to opening your own food business

As I mentioned, I became a silent partner in a business in Sri Lanka and even though I did some work there, I still wouldn’t have called myself a foodie person. I had very little interest in food – I preferred the operations side of the business.

When I arrived in Brighton, I was focusing on my art when it came to my attention that a pub kitchen had no food offering since lockdown. We came up with the idea of Kottu in Brighton. Within a few weeks, we were ready to open and hit the button on our Deliveroo & UberEats tablets at 5pm on 27th Feb 2021. It was a very long five hour wait until 21:59 when it finally beeped! I couldn’t believe it, someone had placed an order! I remember his name was David too (thank you David).

Unfortunately my chef left after a few months, which left me in a difficult situation. I either had to close or step up myself. I studied my menu (it was half the size of what it is today) and got some help from Sri Lankan chef friends via Zoom. I’ve been cooking for The Lankan ever since.

The more experience I have the more ideas I have to better The Lankan. I’ve changed many of the recipes and learned a lot. My fiancée helps me when I have some new ideas. She’s an excellent chef and a great help on many levels.

What passions do you have outside of work?

I like painting. Art is my main passion. I currently don’t have as much time to paint as much I’d like, but to be honest I’ve found art in cooking. I’m exhibiting at the Talented Art Fair at Brighton Racecourse from 1-3 July 2022, which is a big event for me. You and can also check out my artwork on Instagram @david.ditroi.

I also skate and have been skateboarding since 1997.

I like when things fall into place. I’ll give you an example. We ended up no marketing person so as I’m a bit old school, I thought flyering would work. I placed flyers all around the North Laine. Every house, every car. To be honest, I could count on one hand how many orders we gained from that… But one of that few orders came from Mark who gave me the opportunity to carry on with The Lankan at The Evening Star a year later, after I left the kitchen at the North Laine Brewhouse. It felt like it was meant to be.

Someone placed an order on UberEats and gave me a 1 star review for a Diet Coke… That really upset me as it is not easy to maintain a good star rating and that dragged my overall rating down below standard.

If you weren’t working in food, what else would you be doing?

I believe I would be an artist (as I still am). I just had an article about my art series in a magazine in Budapest. So slowly slowly that progresses as well.

What aspirations do you have for your career / business in the future?

I eventually would like my own sign above the door but I think that’s normal, and I’d like The Lankan to be able to run without me being there every day!

Name a recipe everyone should have in their repertoire

Where do you look for inspiration?

I went to Sri Lanka in January to look for new inspiration and recipes, and I came back with a few new ones.