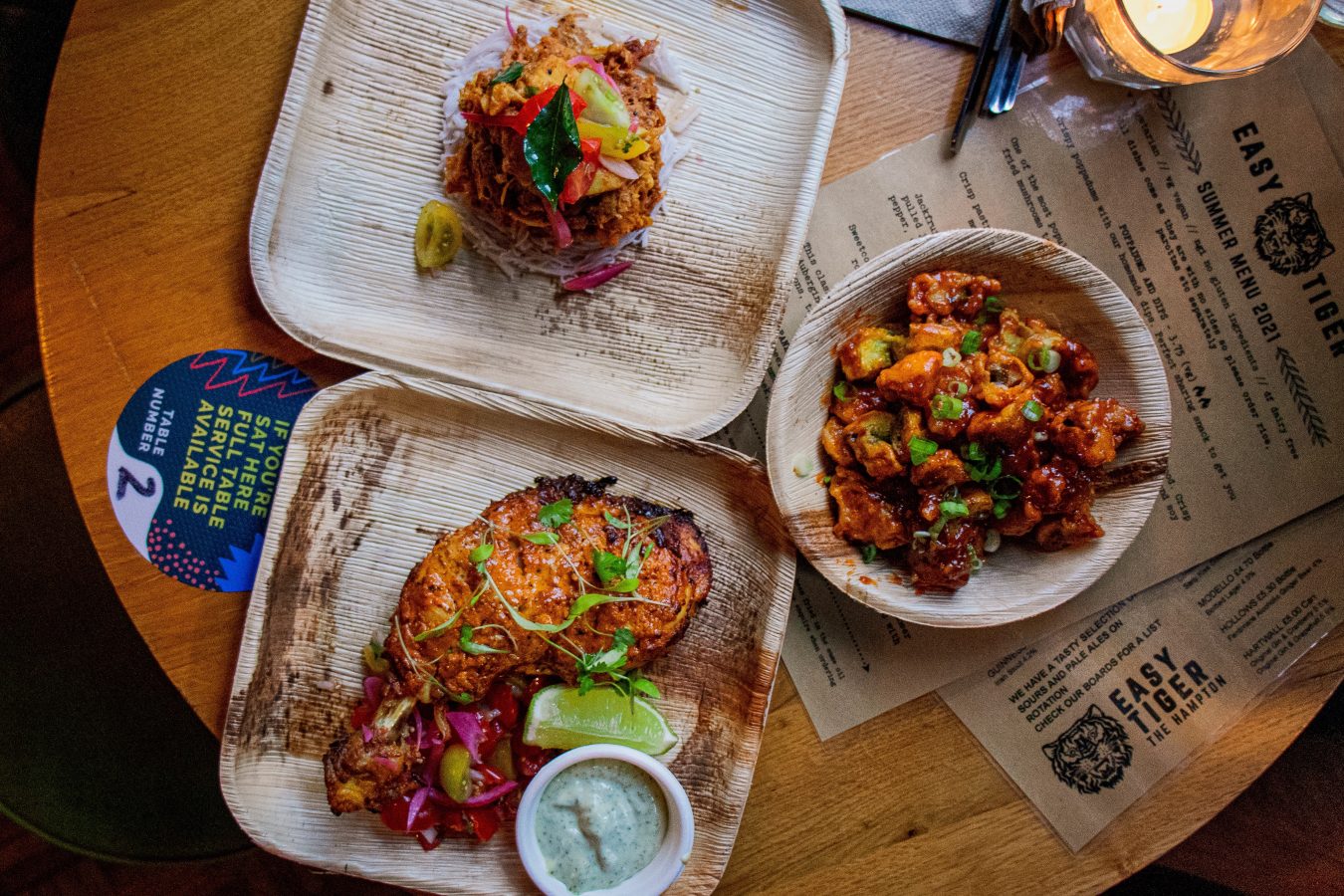 Kanthi Thamma not only put South Indian food on the map in Brighton & Hove, but also experimented with different formats of it in his previous business, Curry Leaf Cafe and is currently head chef at Easy Tiger, a very popular pub in Brighton.

But this is only part of his story. He runs chef-led culinary tours to South India and Sri Lanka under the banner of The Spice Circuit, and takes South India to other countries for pop-ups in Sweden, The Netherlands, Germany, Spain and France to mention a few. His cooking lessons at The Community Kitchen in Brighton sell out months in advance and as if that wasn’t enough, he does events and private dinners, whilst still finding time to raise thousands of pounds for different charities close to his heart.

I do Indian food with a lot of emphasis on South India, where I come from and I love it because those dishes are my memories from back home and my travels. The menu at Easy Tiger for me is like a list of memories. What’s not to love when everyday you take a trip down memory lane.

WHERE WERE YOU BORN / WHERE DID YOU GROW UP?

I was born in a town called Guntur in the state of Andhra Pradesh, which has Asia’s largest and world’s second largest chilli market… I guess that’s where my love for spice started. I grew up in a city called Hyderabad, which is one of a kind when it comes to its culinary scene. It has the best blend of local food combined with dishes from the Royal Kitchens of the Nizam dynasty that has heavy influences of Persian kitchens on their menus. A true melting pot of cuisine and culture.

Summer holidays at my mother’s sister’s homes, sweet mangoes every day and watching them make pickles together and discuss food from morning till night. Four meals a day, all cooked fresh. The thing I looked forward to the most was the the coconut and peanut chutney at breakfast each morning.

HOW DID YOU END UP IN BRIGHTON?

Long story short, I was working for a hotel group in Devon and won 2 nights free stay at any one of their properties. I did not get a room in the first 2 hotels I chose so my last choice was Brighton. I came in winter but the place was still buzzing and I fell in love when I walked through the lanes looking at the food scene here. I went to an Indian restaurant for lunch and loved what the chef was doing. I said hello to him when he came out and told him I loved his concept. He asked if I wanted to join them and I said yes. After n year I got a call asking me if I still wanted to move to Brighton as the restaurant was moving into a bigger premises. I didn’t think twice and that’s how I ended up in Brighton.

TELL US ABOUT THE JOURNEY TO OPENING YOUR OWN FOOD BUSINESS

This one will be a little longer. I already had a food business back in India when I was 23 along with my friends. Our restaurant complex was unique with each floor serving different cuisine and looking completely different. We were way ahead of our time and the place was buzzing with celebrities.

Sadly, a politician’s relative who ran a restaurant in the same road lost a lot of business because of us and he did not like it. He used all the political influence to shut us down. I lost all of my money, a lot of debt needed to be cleared and my dad had to sell the house.

What upset me more was people around me saying I did not know how to run a business, and that’s when I decided no matter what, I will prove them wrong. A year and a half later, I landed at Heathrow with £200 that my mum gave me and a flight ticket that my brother had bought for me. I knew one day I would open my own food business again but when and where, I had no clue.

My menu and concept were ready the very first year I came to the UK but it took me another 6 years to get there and open the doors of my first venture.

WHAT PASSIONS DO YOU HAVE OUTSIDE OF WORK?

I love to travel, especially for food. That’s how my Spice Circuit Food Tours started. My favourite pastime is to randomly look for flights and places.

Apart from travel, I love photography, especially food and nature. I’m also a big movie buff and I also like to shake my leg sometimes to Bollywood beats. Haha.

When Roman, my 18 year old kitchen porter from Czech Republic won the young chef of the year award within one year of him joining my team. He was competing against some famous restaurants. It was a super proud moment for me as his mentor and the same evening, I won the ‘Food Hero’ of the year award but Roman winning was much more satisfying.

There are a few actually. The bullying from a couple of my head chefs when I came to this country was really sad. I was told it’s part of the kitchen culture and I just had to carry on. The worst is Covert Racism. I should have spoken out against it then but I was new in this country and was scared. This definitely has an impact on mental health and makes the work environment very unpleasant. Luckily, change is happening as the younger generations take over kitchens. I definitely advise new recruits to stand up for themselves if they don’t think that their employer’s behaviour is appropriate.

IF YOU WEREN’T WORKING IN FOOD, WHAT WOULD YOU BE DOING?

I definitely would have been a choreographer and probably working in the film industry.

TELL US SOMETHING PEOPLE WOULDN’T EXPECT ABOUT YOU

I don’t read any reviews at all about my food. Be it good or bad. Also that I’ve only worked in one Indian restaurant in my life. They’ve always been European and American restaurants, so I can do lot more than just Indian food. There is this stereotyping where lots of people think Indian chefs can only cook Indian food.

WHAT FOOD TRENDS DO YOU EXPECT TO SEE IN THE COMING YEARS?

Homegrown recipes are in. Lots of young chefs love to bring recipes from back home and feature them on their menus. Progressive Indian is another trend that has started and more ‘fun dining’ than ‘fine dining’.

WHAT ASPIRATIONS DO YOU HAVE FOR YOUR CAREER / BUSINESS IN THE FUTURE?

Businesswise, I don’t plan too much but try to take up whatever comes my way. I just wanted a restaurant to be honest but then I also do cooking lessons, food tours, pop ups in different countries, supper clubs, private dinners, fundraisers etc and I can proudly say very few Indian chefs have such a profile.

So, I ticked more boxes than I thought but if I had to pick an aspiration it will have to be a cookbook where I share a lot of food related memories and stories and retirement plan would be a state of art cooking school to help get more chefs into industry.

NAME A RECIPE EVERYONE SHOULD HAVE IN THEIR REPERTOIRE

WHERE DO YOU LOOK FOR INSPIRATION?

Inspiration comes from a lot of places. Street hawkers, food markets, my family kitchens, spice farms and other homegrown chefs that I meet on my tours or when I travel.

The royal table at Falaknuma Palace in Hyderabad as part of a recent family wedding. Imagine a single table of 101 chairs in the palace dining room with a lavish banquet from the Royal Kitchen and everyone gets their own waiter. This is something one can only experience as no words can do it justice.

RESTAURANTS YOU WANT TO VISIT

Oh god! The list keeps growing but I do not get enough time. Wild Flor, Tlaloc, Burnt Orange and Cin Cin are on my immediate list though.

There are a few but if I had to pick one, then without a doubt it’s Bincho Yakitori.

Tell us about your charity work

I don’t like to call it charity but in a way it’s a responsibility. I come from a country where there are hunger deaths and some people don’t know where their next meal is going to come from. It breaks my heart to see the amount of food that goes into bins here, so I try to do my bit to support local food partnerships.

I also feel so lucky to have some amazing friends in the industry, who just jump in whenever there is a crisis and I want to raise funds to help. Big shout out to Boho Gelato who has always been part of my fundraisers. There were times I was not in a position to help but now I am, so why not? Every little helps. 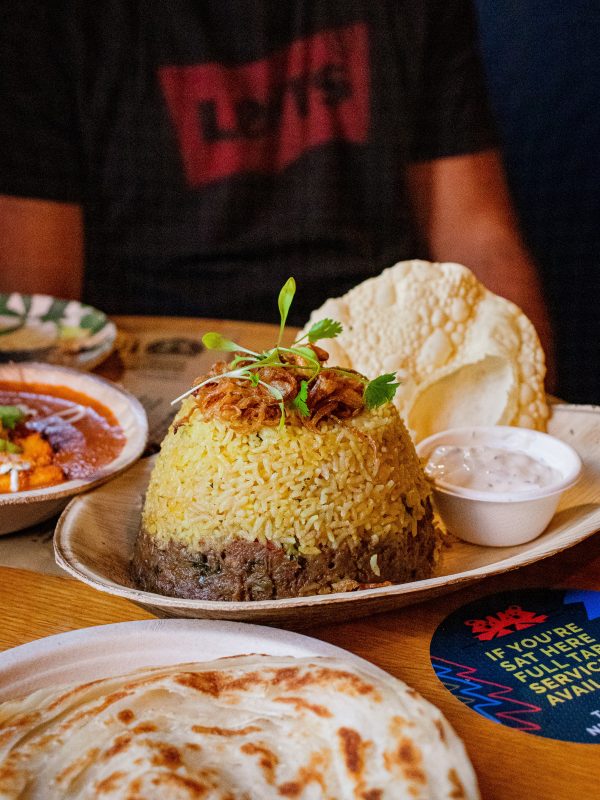 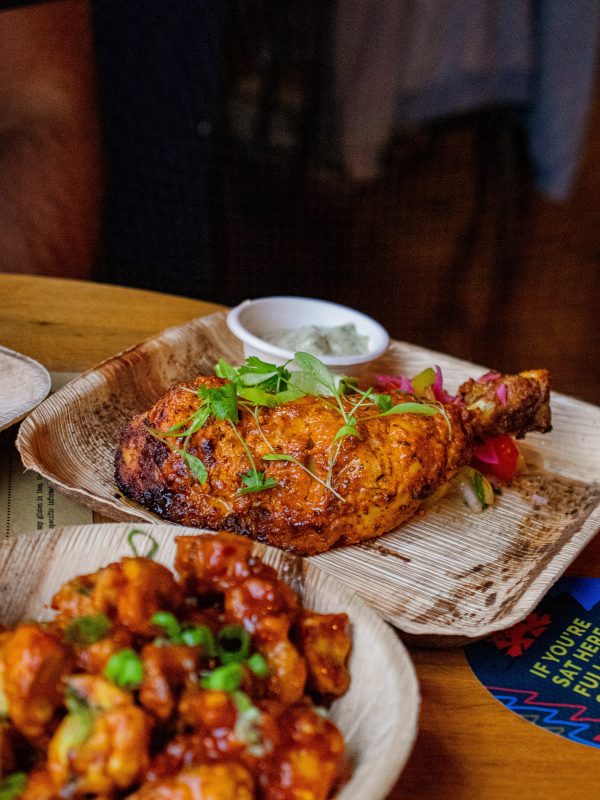 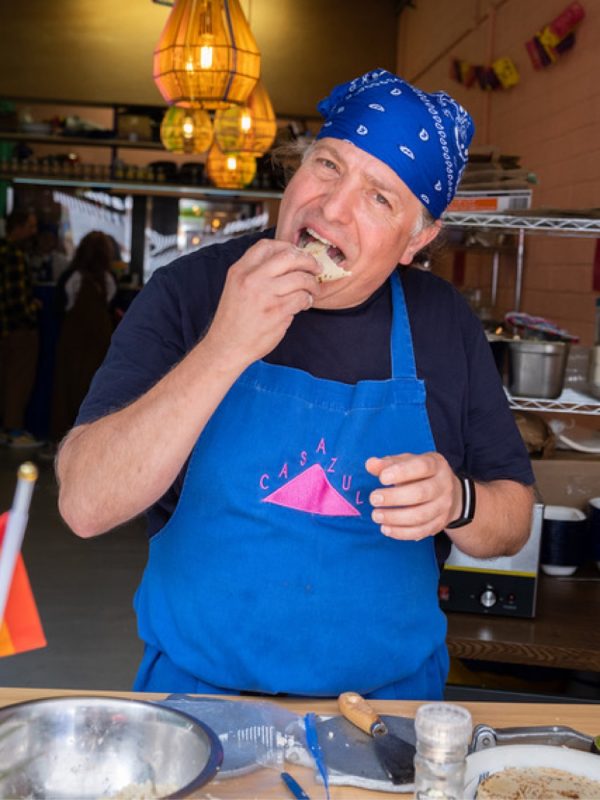